Home » Stories » Autobiography of a Green Ash on Sawyer Avenue

Autobiography of a Green Ash on Sawyer Avenue 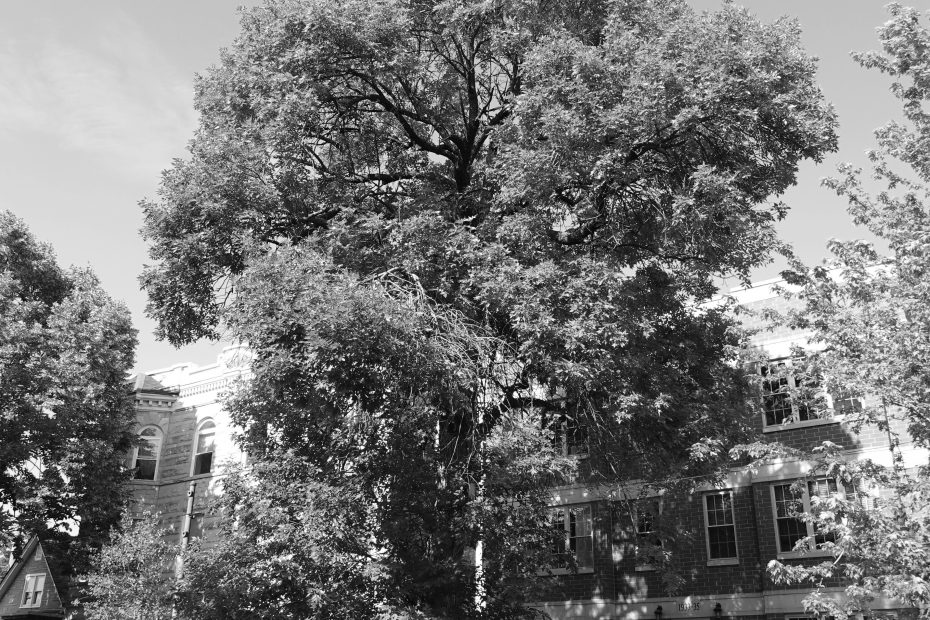 Every morning the sun rises above a red brick building next to me and lights up the sky as my leaves stretch out to catch the energy. The building is the largest one on the block, but my highest branches reach well above its limestone-capped parapet walls. After the sun’s up, doors of the red brick building and the smaller homes on the street open up. People slowly trickle out, sometimes walking dogs or pushing baby strollers. Other times they step into shiny metal boxes and drive north, always north, up Sawyer Avenue and towards Armitage. Pretty much everyone on my side of the street speaks English. On the other side of the street the sun sets behind a group of wood frame homes each evening. On that side of the street, more people speak Spanish at least some of the time.

One summer a few rings ago, someone taped a colorful poster to my trunk labeled, “Block Party.” An old wooden privacy fence on the opposite side of the street had a similar poster- but that one said, “Fiesta de Cuadra.” One day that summer, people came out from their homes on both sides of the street and hoisted up a blue tent and a white tent. Then they rigged up a tank full of water and an inflatable house in the middle of the street. Soon there were hotdogs and hamburgers, Mexican rice and Puerto Rican rice and jibaritos and Italian beef and coffee. Then there were tables with dominoes and chess. Children blew bubbles and drew with chalk in the street. A small group of people gathered under the blue tent. They unpacked a guitar and a charango and a bombo legüero and a cajon and a pan flute. Soon my leaves vibrated with music composed on the other side of the earth.

These people come and go from all corners of the earth, sometimes visiting Sawyer Avenue only for a day. But we trees always stay for a lifetime. I have aunts and uncles and siblings and cousins and nieces and nephews scattered all across the city. We have one thing in common: resilience. Chicago is a tough city, but our roots connect firmly into the earth. We can survive the polar vortices and heat waves and thunderstorms that wash through the city. We feel invulnerable, most of the time.

There’s a park just a few blocks north of me, called Palmer Square Park. It’s near where Shel Silverstein grew up and took inspiration for the name of one of his books from an abruptly terminated sidewalk. The brick rooftops on Armitage block my view of this park. But around the time of the block party I heard that the trunk of one of my fallen cousins was memorialized by a concrete sculpture of a giant white hand. This sculpture is known as the Helping Hand, but it’s hard to tell if the hand is helping or strangling the tree. Just above the hand is a concrete replica of a giant beetle known as the emerald ash borer.

Twenty rings ago, I first heard it from a tree, who heard it from another tree, about a new beetle in town that takes its name from our destruction. The emerald ash borer crossed the sea as a stowaway in wood packing materials in cargo from a land far to the east. The adult beetles seem harmless enough, but it’s complicated. They lay eggs in our bark, and when the larvae hatch they zigzag across our xylem and phloem, cutting off our vital flow of nutrients and water. For a while the City of Chicago had been making the rounds treating the ash trees against the emerald ash borer. But they’ve since officially given up. I’ve been a lucky survivor so far but much of my family on both sides of Sawyer bear the telltale D-shape holes across their bark where the adult emerald ash borers escape. Much of my family in Palmer Square Park have already been felled by the beetle. It’s an arboreal horror show and I’m seeing my life flash before my eyes.

A hundred rings ago I was not so tall but the homes on Sawyer Avenue were smaller. The lot next to me and the one past that were open yards. I could see straight past Kedzie Avenue, down Homer to Albany a quarter mile east. Armitage Avenue was becoming lively, bustling with Polish and Jewish and Scandinavian and German immigrants. The breeze delivered the scent of perfume and paint from small factories west on Armitage. To the east there was a bakery and a cobbler and a billiards and bowling alley called the Sportsman’s Club. As my roots spread deeper into the ground, the people around me wove a social fabric together that brought some stability to the community. These people came and went, and sometimes that fabric would fray a bit in the transition. But somebody would always be around to knit it back together.

By seventy rings ago the fabric was fraying more quickly than people could stitch it together. Factories and stores closed down. People left the city for the suburbs where there was more space and more trees. The nearby Humboldt Park branch of the train was discontinued, and more and more homes were neglected and abandoned. At the same time, middle-aged widows from the countryside came to work in the city and rebuild their life anew, settling into a deaconess home on Cortland and Sawyer set up by the Methodist church. Immigrants moved in from Puerto Rico and Mexico and took care of some of the homes. As with everyone else I provided the newcomers with shade, but for reasons I can’t understand the new people and the old people didn’t always work together.

To be sure, these people did work together, but kept within their own groups, and against other groups. The Gaylords and other white gangs tried to intimidate the Latinos moving into the neighborhood, and the Latinos banded together into their own gangs, including the Imperial Gangsters and the Latin Kings, which sometimes fought each other in addition to fighting against the white gangs. More factories closed, the deaconess home was sold to support a scholarship fund, and some of the younger people scraped together money by selling drugs. The fighting got worse. Young boys were getting shot, and everyone lived in fear. The social fabric seemed like it was becoming completely undone.

In some ways, trees have it easier than people do. Our roots are strong, and the sun that feeds us always re-emerges between stretches of cloudy days. We can keep growing up and out and not worry so much about what’s happening on the ground. Some people seem just as resilient as me, though, hanging together, working for stability and weaving together the fabric at the same time it was being torn apart.

Thirty five rings ago, a young family from Guatemala bought the three-flat at Armitage and Sawyer, set up a church on the corner and worked to build faith and resilience. There were tambourines, there was an organ and bass, there was Spanish-language singing, and there was community. Around the same time the windows of the former deaconess home on Cortland had been smashed open, and drug dealers and prostitutes made it their place of business. The abandoned greystone just north of me and a smaller home just south of me were knocked down. Sawyer Avenue was both falling apart and coming together, at the same time.

Fifteen rings ago, two tall buildings rose up by my side, one red brick and one orange brick. People with money started to move in. Work began on renovating the abandoned deaconess home. As property taxes and rents rose, the gangbangers and prostitutes slowly disappeared, but so too did some of the poorer residents. There was more English, and less Spanish. Wisdom was gained, and wisdom was lost. More restaurants appeared on Armitage, and more rats scampered around dumpsters and into residential yards.

My oldest memory dates back to over one hundred rings ago. Planted in the soil carved into open rectangular lots, I was a sapling amidst a smattering of small homes. I saw a coal and wood yard across the street. I heard horses trotting to and from a livery by Armitage and Spaulding. Prayers echoed from a church on Cortland and Spaulding, German prayers, from a bygone era, but those prayers and the church were new at the time. As I get older I reflect more and more on the fact that some day I too will fall and my story will be forgotten. But the dirt beneath me will absorb part of my story. That same dirt holds much older stories of the Potawatomi, the Miami, and the Illinois roaming the tallgrass prairie. That dirt is a mix of a great many stories. That dirt was here long before me and will be here long after my time has come.

Since learning about the green ash tree’s plight, the residents of the big red brick building next to the tree arranged for an inspection by a Bureau of Forestry staffer and an arborist. The tree was deemed still healthy and worth saving. Luckily it had been one of a small number of green ash trees in the area treated for protection against the emerald ash borer during the city’s short-lived program. It was treated in June, at a condo association’s expense, to help ensure an even longer life.

Treating the ash tree cost the condo association $400. But these trees could be treated at scale for a fraction of that cost, saving money over removal and replacement.

At a city budget hearing on Tuesday October 6, aldermen and public commenters (including the author of this blog) advocated setting aside some funding for ash tree treatment from the $46 million proposed for planting new trees. Separately, Daniella Pereira of Openlands advised balancing new plantings with maintenance of healthy ash trees, noting:

“You can’t plant a very large tree. So to get the canopy that we’re losing from our ash decline is going to take, you know, decades…one of the best ways to manage the forest would be to save any healthy ash tree you can.”

As of October 15, 42 of 50 Chicago alders support a resolution to fully fund ash tree inoculation.

4 thoughts on “Autobiography of a Green Ash on Sawyer Avenue”