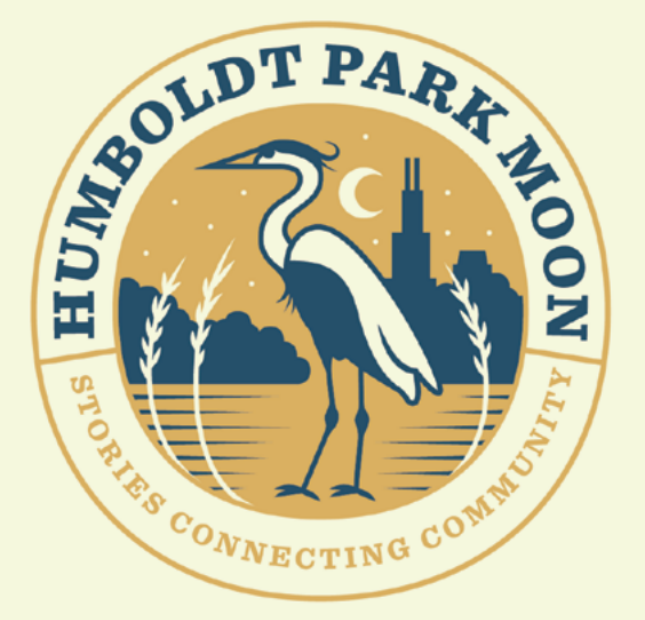 -Adrienne Rich, What Is Found There: Notebooks on Poetry and Politics (2003)

A graceful, majestic bird wades motionless on the edge of Humboldt Park’s West Lagoon. Its head feathered in short black plumes and shoulders patterned black and chestnut, the bird tucks back its large yellow-orange bill into an elegant S-shaped curve. Typical of Great Blue Herons, the bird stands alone.

The bird and tower are separated by nearly four miles as the heron flies. Depending upon your place within the predator-prey system, the nearly five foot tall heron might catch your attention before the imposing skyscraper. But both significantly connect Humboldt Park to a larger world: the tower to the global economy, the bird to our continent’s shallow waterway ecological heritage.

It’s remarkable that such a bird would choose a home so close to downtown Chicago’s concrete jungle, within a park surrounded on all sides by busy city thoroughfares. But one Chicagoan, saxophonist Sam Burckhardt, documented not just the heron but another 147 different species of birds, including 4 other types of herons, during visits to the park in the year 2009 alone.

Humboldt Park’s lagoons, like the former Sears Tower, are man-made creations. In the 1870s, landscape architect William Le Baron Jenney first developed the park as a flat prairie landscape with two lagoons. Then in 1906, Jens Jensen took inspiration from natural rivers he saw on trips to the countryside and sculpted a natural river connecting the park’s lagoons.

And so Humboldt Park became exactly the type of wetland habitat preferred by Great Blue Herons and other shallow freshwater wading birds.

Dan Lory, blogger and board member of the Chicago Ornithological Society, seems to dismiss the mythology of the Great Blue Heron as a peace symbol. He instead labels it a beast of mass destruction.

“When one glides into a marsh with its gracefully ponderous flight,” he writes, “every sentient creature hunkers down and hopes that the bird will just keep on flying, and not stop to unleash its destructive fury.”

Noting that this heron feasts on wood ducks, koi, rabbits, small birds, frogs, and crayfish, he adds, “It is absolutely amazing the variety and the size of creatures that a Great Blue Heron will load into its cavernous fuselage via its long, elastic neck.”

Other sources emphasize that fish are the heron’s main diet. Regardless of the prey, the heron attacks by first straightening its elegant S-shaped neck into a dangerously long dagger-like bill.

Great Blue vs. Chance the Snapper

So what would happen if the fearsome heron faced off against Humboldt Park’s most menacing resident of recent years, the famous alligator of 2019?

A Great Blue Heron swallowing a small baby gator whole is not unheard of, but generally gators along with hawks, eagles, and raccoons count amongst a small number of Great Blue Heron predators.

Habitat destruction by human beings is generally a much bigger threat, but thankfully herons enjoy some protection, especially from hunters, under the Migratory Bird Treaty Act of 1918. As a result of these protections, the bird’s natural strength, and preservation of natural and man-made wetland habits, the Great Blue Heron is today the most common heron in North America.

How can you find these herons? Though they typically winter in the southern U.S. and South America where they can find fish year-round, they typically arrive in Illinois around February each year.

According to government officials, one might identify the Great Blue Heron by its signature call, “frahnk, frawnk, frawnk!”

But most of the time, the bird silently waits and watches its environment. And outside of hunting hours, it nests 100 or so feet off the ground in clusters of 5 to 100 nests known as heronries.

Still, if you’re patient and observant, you might spot one motionlessly or stealthily stalking its prey along the edges of marshes, ponds, lakes, flooded fields, swamps, or rivers.

On the last weekend of July a Humboldt Park neighbor reported a Great Blue Heron flying around the Humboldt Park West Lagoon. Since then I’ve witnessed the bird several times, at all hours of the day but reliably in the morning before 9 AM.

Years ago I spotted one by the National Museum of Puerto Rican Arts and Culture. But as that marshy area ran dry, a viable heron hangout vanished.

A Logo for The Humboldt Park Moon

From the outset, The Humboldt Park Moon’s vision has been to share stories connecting us as neighbors, across cultures, across history, and between nature and civilization.

Jason and Margaux Teegarden-Downs of Delicious Design League have lived and worked in the heart of Humboldt Park for over two decades, developing a deep appreciation for the neighborhood, its people, and the park itself. They created the new logo for Humboldt Park Moon as a symbol of the neighborhood’s connection to the city, to the world, and to the natural habitat.