Survival of the Tastiest: Kitchen Evolution in Humboldt Park 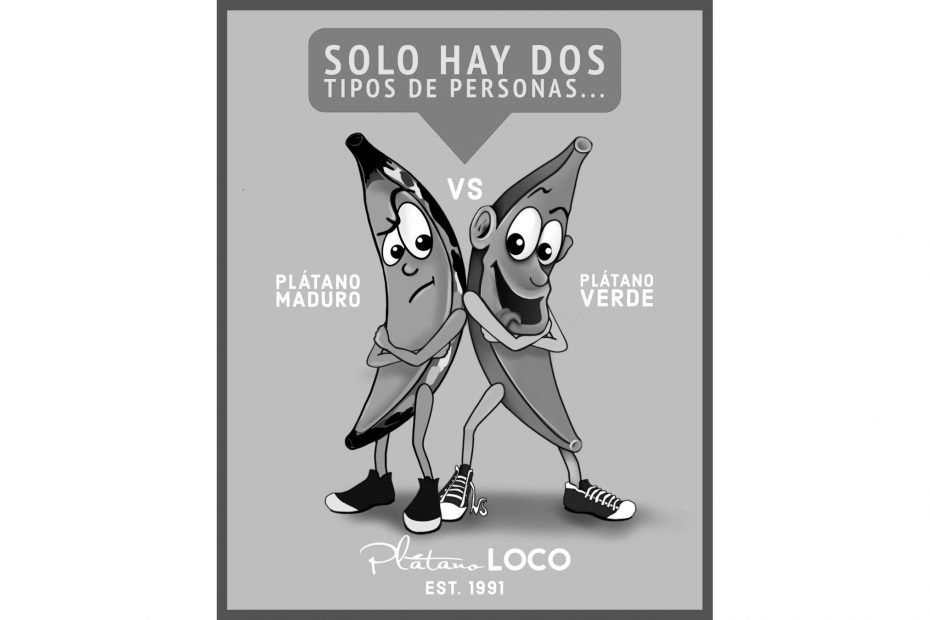 “One night at our home, my family and I were hungry,” writes Jorge Muñoz of Plátano Loco in Aguada, Puerto Rico. “It was late and everything was closed, they wanted sandwiches but there was no bread. I went to my backyard, took some plantains from “la mata de plátano” and proceed to experiment in the kitchen. Made two long alike tostones and used it as buns for the sandwich. We started calling it ‘Sandwich de Plátano.'”

That story might sound far-fetched, considering the plantain’s resemblance and relation to the banana. But plantains are starchier and lower in sugar than their cousins, making them an incredibly versatile ingredient. Their widespread availability in the Caribbean, Latin America, and Africa have fueled the evolution of a wide range of plantain-based dishes.

While most accounts suggest the sandwich de plátano is not particularly common in Puerto Rico, the similar patacon sandwich is commonly featured in Colombian, Venezuelan, and Dominican cuisine. In Port-Au-Prince, the Shack serves up the shackabana on a plantain foundation. In Chicago, plantains sourced from the Caribbean and Latin America are the key ingredient supporting the rise of the jibarito, one of the city’s best known culinary traditions.

Juan Carlos Figueroa was born on a farm in the mountainous town of Jayuya, Puerto Rico. A self-described “jibaro,” which roughly but affectionately translates to “hillbilly,” he adopted the nickname “Peter.” Growing up, his dad didn’t cook and his mother wouldn’t let him cook. But as a child he’d closely watch his grandmother crank out a dozen recipes at a time, including tostones and bacalaitos.

Figueroa’s parents separated, and in the late 1960s his father moved to the United States. In 1976 and then in his ’20s, Peter moved in with his father’s family, then in Bucktown. Along with his father, he opened the Cabaña social club in Humboldt Park and worked in the kitchen. Cabaña didn’t last, but he and his father started over with Figueroa Food & Liquor. This too couldn’t pay the bills, and so Peter returned to Puerto Rico where his mother still lived.

At a restaurant in Puerto Rico Figueroa did nothing but make mofongo all day. Mofongo, a ball of fried plantains mashed with pig skin, garlic, salt, oil, and served in chicken broth, would become a core part of Figueroa’s repertoire. But eventually he returned to Chicago to help his father and brother run the American fast food restaurant El Parador.

By now Figueroa had mastered the mofongo and alcapurrias (green banana fritters) and commanded a small following from his Figueroa Food & Liquor days. He was ready to start a new restaurant as a one-man show. In 1987 El Borinquen opened at 1720 North California in Humboldt Park.

El Vocero, a Bridge Across the Sea

Every day while making supply runs to stock up El Borinquen, Figueroa picked up a copy of El Vocero. Most mornings after finishing up prep and while waiting for customers, he’d read the San-Juan-based paper. One day in the early 1990s he came across a recipe for the sandwich de plátano. Perhaps this was the same recipe developed by Plátano Loco. Intrigued, he made one for his father.

“This is it. This is what I’ve been waiting for!” his father exclaimed.

Over the next month, Figueroa made another sandwich for his father every day. Encouraged by his father, he gradually perfected and “Americanized” the recipe.

Figueroa’s steak sandwich featured sliced tomatoes, lettuce, onions, American cheese, smashed garlic, oil, and adobo seasoning. As in the El Vocero recipe, he housed the sandwich in a green plantain split in half, flattened in a press, and twice-fried. Basically “like a steak sandwich from the country,” he called his creation the “jibarito.”

Figueroa’s father was not alone in loving the sandwich. At first, news of the sandwich spread by word of mouth. Then in the mid 1990s, a woman in treatment at Saint Mary’s hospital sent her daughter to El Borinquen to pick up her favorite sancocho– a Latin American soup. As luck would have it, her daughter happened to be Monica Eng– an entertainment and ethnic culture reporter for the Chicago Tribune. Eng eventually tried the jibarito, and like Figueroa’s father, loved it. Inspired, she wrote a series of reviews for the Tribune praising the sandwich. Local radio personality Ray Rubio also praised the sandwich, and dubbed Figueroa’s restaurant “La Casa del Jibaro.”

Figueroa recalls that the lines outside his door extended to as many as a hundred people. Increasing the versatility of the jibarito, he offered pork, chicken, and ham, in addition to vegetarian and breakfast versions of the sandwich. Demand reached upwards of a thousand sandwiches per day. To keep up, he expanded El Borinquen to 17 staff, adding two dining rooms and a patio. With his family he opened two additional restaurants in Belmont Cragin, as well as an outpost in his hometown of Jayuya.

The Jayuya restaurant was short-lived, and the jibarito never really took off in Puerto Rico. But Figueroa’s success kept building in Chicago. Despite this, by 2007 Figueroa shifted much of his attention away from the restaurant business. Ever the serial entrepreneur, he launched a series of bottled salsas available in local grocery stores.

But “of all my accomplishments,” he told Roberto Pérez of Urban Pilón in a 2018 interview, his greatest “was the day I was able to purchase back my farm in my hometown of Jayuya.” On that farm, which his family previously sold following his uncle’s death, he grows several varieties of plantains.

Jibaritos for All the World…

FIgueroa’s brother Angel suggested that he patent his recipe for the jibarito. Other chefs offered money for rights to use the recipe. But he refused the money and refused to patent. This paved the way for other restaurants- not just Puerto Rican, but also Cuban and Mexican, to freely add the jibarito to their own menu. As a result, the jibarito’s popularity continued to grow.

“It would be hard to throw a plantain in Humboldt Park these days without hitting a restaurant that proudly advertises the delicacy in the window,” wrote Monica Eng in 2003. By her count one could find the jibarito in at least 24 restaurants in Chicago, as well as in Milwaukee and Cleveland.

Today the jibarito is no longer a primarily Midwestern delicacy. Jibaritos are now widely available in Orlando and the Bronx, both cities with over a million Puerto Ricans. One can also find jibaritos in Rochester New York, Boston, and countless other cities with or sometimes without significant Puerto Rican communities.

…Even for Those Picky Vegetarians?

Luis Collazo grew up on the northwest side of Chicago and attended Roberto Clemente High School. With strong ties to Humboldt Park, the jibarito inevitably reached his family. His wife tried to make her own, often breaking plates in the process of flattening the plantains. One day she asked Luis if he could make her a device for flattening plantains safely. And so, he built her a jibarito press. Visiting family members loved the idea, inspiring Collazo to launch his business Jibarito Maker. “Here’s the chance to reduce the amount of dishes you break or even struggle using two useless items to press your plátanos,” his site proclaims. According to Collazo, his press is popular amongst vegetarians and has sold to at least one restaurant in Canada.

While Figueroa’s classic jibarito recipe should not ordinarily be mistaken for health food, other chefs have indeed made healthier vegetarian variants. It helps that plantains provide a tasty, gluten-free alternative to bread. The Jibarito Stop in Pilsen creates vegetarian and vegan jibaritos based on avocado, bell peppers, and onions. Casi Yari in Logan Square offers vegan options using eggplant or jackfruit in place of meat. Karla, a food blogger in Puerto Rico, suggests using seitan or tofu. But she insists on maintaining a core aspect of Figueroa’s recipe: it’s best to fry the plantains, and not with an air fryer.

Enough with the Jibarito, Already

We may be limiting ourselves with our jibarito obsession, suggests culinary historian and chef Roberto Pérez, who founded Urban Pilón. He even dismisses any suggestion that Figueroa was a one-hit wonder with the jibarito. Figueroa’s success depended not on luck but on a habit of “taking chances and creating dishes outside the box.” He points out that Figueroa invented other plantain-based dishes including el volcán, essentially mofongo shaped like an erupting volcano. Casa Yari, El Mofonguito, and Borinquen Lounge all include el volcán on their menus today.

Aside from el volcán, Figueroa’s relentless willingness to try out new ideas extended even to customer suggestions. Jean Iversen memorably records the origin story of the jibarita in Local Flavor, Restaurants That Shaped Chicago’s Neighborhoods. As told by Figueroa:

“This lady walked in the restaurant, and she goes, ‘I’m tired of eating jibaritos. I want a jibarita!’ I didn’t know what to say. So I said, ‘How do I do that?’ And she goes [in a very drawn out, seductive tone] ‘plátano maduro’ [sweet plantain]. It was hard to make, because when you cook sweet plantains, it doesn’t stay hard, it’s soft, so it’s gotta be in like, a meal. You have to eat it with a fork and knife. And that lady, she bought ten of ‘em the same day.”

While praising the plantain, Pérez would like to challenge us to cook with other ingredients that might be outside of our familiarity zone. He suggests cooking with green papaya, coconut, breadfruit, yams, soursop, starfruit, mamey, and guava. These ingredients are commonly available in local grocery stores such as Cermak Produce and Rico Fresh. With such raw materials close at hand, Humboldt Park remains the perfect setting for the evolution of the next great recipe to change the world.

Ask around Humboldt Park, or Google “who invented the jibarito sandwich,” and you will inevitably find your way back to Juan “Peter” Figueroa. You can also find countless articles retelling various aspects of the jibarito’s journey. Following are some of my favorites.

The Man Behind the Jibarito Sandwich (Urban Pilón, 2018). This blog post by chef and culinary historian Roberto Pérez features an interview with Figueroa. Pérez challenges us all to embrace Figueroa’s spirit of experimentation.

The Jibarito and Its Origin (Sandwich Tribunal, 2017). This blog, which documents a man’s quest to try every sandwich in the world, provides a deep dive on the jibarito.

Saga of a Sandwich (Monica Eng, Chicago Tribune 2003). Peter Figueroa credits Monica Eng for her key role in popularizing the jibarito outside of Humboldt Park.

El Borinquen on California closed in 2012. But it’s still as hard as ever to throw a plantain in Humboldt Park without hitting a restaurant serving the jibarito. Perhaps more importantly, you might consider the jibarito to be the gateway drug to the greater depths of Puerto Rican cuisine. Pérez recommends that we try mofongo, sancocho, or chayotes relleno next.

“I’d suggest for us as customers to try different things. I have seen many menu items be eliminated throughout the years. It’s for the betterment and sustenance of culinary traditions,” Pérez tells me.

And if you’re trapped in the grip of a jibarito bender and wake up at 3 in the morning craving a sandwich based on a twice-fried flattened green plantain, you could try making your own. Luis Collazo’s jibarito press really is a handy tool. You can find Collazo selling his presses under a tent in Humboldt Park by LeMoyne and California during the summer.

Bacoa– Pérez cites Xavier Pacheco, the owner of this farm-to-table restaurant in Juncos, as a particularly innovative and inspiring chef worth watching.

Plátano Loco– The owners of this restaurant plan to search the El Vocero archives to find concrete evidence that they invented the sandwich de plátano. Regardless of the evidence, their spirit of innovation behind the concept of “everything with plantain” is undeniable. Their menu includes plantain pizza, plantain dumpling soup, plantain wings, and flan de plátano.