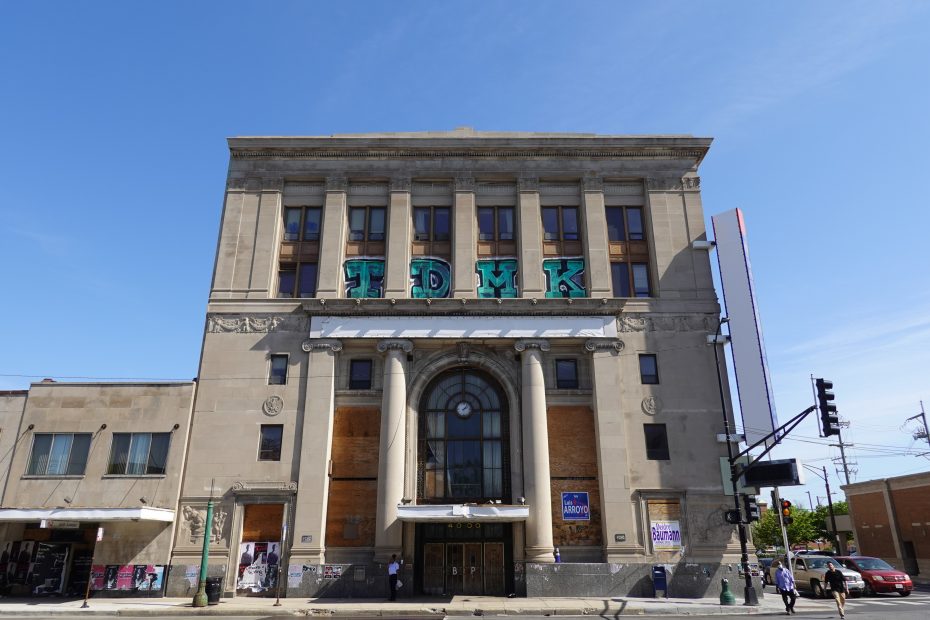 Tonight is the Full Flower Moon on the Algonquin lunar calendar. This marks the time of the year when flowers rise up from the earth in abundance. Nearly a century ago but long after European settlers drove most Native Americans out of the area, a five-story limestone-fronted Classical Revival building rose up on the corner of North and Crawford (now Pulaski) as home to Pioneer Trust and Savings Bank. During a “golden age” of bank architecture, bank buildings rivaled schools and churches as monumental symbols of stability. Our society’s rugged individualism gradually gave way to strengthening community. And the bank served as a neighborhood anchor spurring local economic growth.

The bank evolved over the course of the 20th century. Weathering the great depression, it became one of the nation’s largest commercial banks by mid-century. But in the 1970s, local activists documented the bank’s pattern of providing abundant loans to suburbs while disinvesting from its own neighborhood. In the following decades, the bank renewed its commitment to community lending. Adapting to changing community demographics, the bank merged with Puerto-Rico-based Banco Popular in the mid 1990s.

And then the robot ATMs arrived, replacing most bank tellers. Banco Popular moved to a much smaller location across the street, later selling the building to First Midwest Bank.

The City of Chicago provided landmark designation of the Pioneer Bank building in 2012. But the now-vacant building has slowly been scavenged and ransacked, spelunked by rafters sailing into a flooded basement bank vault, boarded up, tagged, and plastered with concert posters and political signs. Today it’s the target of a $50+ million city-driven re-investment effort. At the same time, local community organizers struggle to influence the future of this building and their own neighborhood.

I believe context is everything. The story of this building connects to many things: the balance of power between close-knit community organizations and well-resourced outside actors, the shifting tides of our society not just in the neighborhood but in the city and the world. Thus far the story continues to raise new questions as I’m able to answer old ones. Much appreciation to those past and present neighbors who have provided photos, stories, insight, and interviews, as I continue to learn and connect the dots. I plan to post two or more stories related to this building in the coming months. And, I’ll share my discoveries along the way.