Wooden UFOs and Nylon Homes in the Zone of Silence 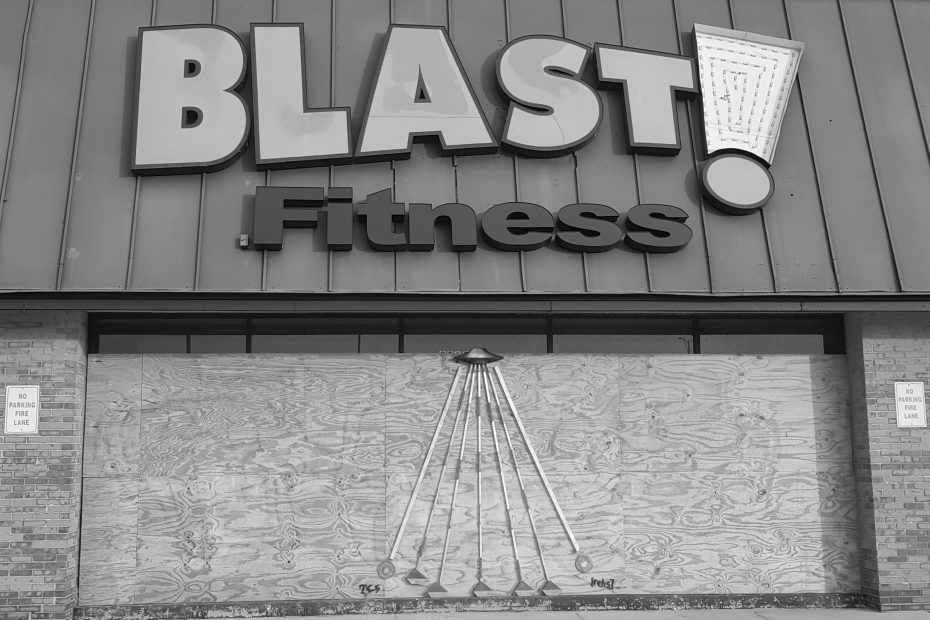 The word “Blast!” captions the boarded-up entrance of a vacant commercial building at Division and Central Park. The letters are bold orange, but the broken-off exclamation mark dulls the interjection to plainly, “Blast.” Seven contrails fashioned from metal-painted wood permanently suspend a hand-crafted wooden UFO blasting off directly beneath the caption. As recently as last winter a canvas poster on the storefront advertised a lapsed possibility: “Join here! Blast Fitness. Only $10 a month.” But the canvas poster has since disappeared while tents, milk crates, blankets, and miscellaneous articles of clothing accumulated, flanking the UFO to either side beneath a sheltering blue awning.

The 30,000 square foot former fitness center occupies a 117,000 square-foot triangular lot bordered to the north and east by the elevated tracks of the Minneapolis, St. Paul and Sault Ste. Marie Railroad (colloquially known as the SOO line). Across Division Street on a similar-sized triangular lot sits an abandoned CVS which has been vacant since early 2017. The two empty locations had been rival grocery stores in the 1970s and 1980s.

The Zone of Silence

Chicago public artists [rehs] and TC struggled with the city’s quiet streets during the peak of COVID-era lockdown in 2020. “It was such a painful time being separated from society more than we ever had,” noted [rehs]. But finding inspiration in “uneasiness, yet calm comfort” of the neglected areas of the city, they initiated an art installation series they called the Zone of Silence. The series features UFO sculptures placed in quiet corners of the city, including the liminal Lincoln Yards.

The neglected gym and pharmacy sites at Division and Central Park combine for over 200,000 square feet of vacant commercial space. Traffic in the area slowed during the early phases of the pandemic, rendering a natural zone of silence quieter still. The strategically-placed Blast! sign could serve as a perfect caption for a wooden UFO. And so the artists chose this site for the fourth installation in their Zone of Silence series.

Well before the UFO installation, the word Blast! captioned two broad glass doors, which opened to the public in January 2015. Excitement seemed to match the then-fully-formed exclamation mark in the word Blast! The new fitness center brought new jobs into the building, a former grocery store that had long been vacant. Social media posts celebrated the gym life, group classes, and spreading cheer to the West Side. A local pastor likened the reinforcing act of exercise at Blast! to prayer. “Before I knew it, it was nine months later, and I was fucking S-T-R-O-N-G,” storyteller Lily Be wrote of her time at this location in Humboldt Park: Queen of The Tunnels. “And I saw no end to this locomotive train of remarkable health.”

But even as the storyteller, the pastor, and other gymgoers worked towards improved health, the condition of the space deteriorated. In addition to reports of water leaks, estimates of broken equipment ranged from 25% to 70% of the machines. In 2018 Streets and Sanitation levied a $2,640 fine on the property for “uncut weeds,” “over accumulation of refuse,” and “potential rat harborage.”

Despite this, the price- $10/month or $50/year- was right for some. One reviewer noted that “there are so many machines and yes some are broken and have been for over a year, but you can almost always find one to use.”

And then even the price wasn’t right. The club closed abruptly on June 25, 2019. At least one member signed up and paid for a new membership on June 24th- only one day prior to the club’s closing. As it turned out, the building had failed a city inspection that day. Amongst the eleven violations:

Failed to maintain the exterior walls of a building or structure free from holes, breaks, loose or rotting boards or timbers and any other conditions which might admit rain or dampness to the walls. (13-196-530(b), 13-196-641)

The member who signed up on June 24 and others were still being charged. She reportedly gave up on securing a refund. Prior to the closing, other members complained of having to fight charges from their memberships renewing without notification. Expertly navigating the letter of contract law, Blast! avoided some settlements and made some money while earning a solid F on Better Business Bureau.

It turns out that Blast already had a track record of abrupt gym closures dating back to 2015. Some of the closing clubs were financially solvent. Blast’s owner was Steve Borghi, formerly a co-owner of Work Out World who brought with him a questionable track record, according to fitness trade journal Club Industry. His past charges included collecting membership fees on unopened clubs, taking money out of the business’s account without notifying his co-owners, and a $3 million settlement for violating a noncompete agreement.

Perhaps only Stanley Kubrick could have imagined the feverish rage Blast’s challenging cancelation process triggered for at least one Yelper:

Them That’s Got Shall Get

While a source of anguish for some local residents, a lost $50 annual membership fee at Blast! would be chump change to well-connected real estate players such as Victor Cacciatore. Paying $775,000 to secure the site in 1992, Cacciatore invested another $450,000 to convert the former grocery store into office space. He then secured a lucrative lease to rent the space to Illinois Department of Children and Family Services.

In their 1992 exposé, “Helping their Cronies is the Lease Politicians Can Do,” the once-formidable watchdog Chicago Tribune noted that Cacciatore was charging a per-square-foot rental rate in Humboldt Park comparable to the cost of downtown high rises. Projecting he would earn $2.3 million in rent over five years, the Tribune noted that he’d recoup his entire investment in less than three years.

As it turns out, Cacciatore had secured the signed lease from the state four months before he even owned the building. This was also prior to what the Tribune suggested was a sham competitive bidding process. One might speculate that Cacciatore’s contributions to Illinois governors- $27,000 supporting James Thompson (1977-1991) and $9,000 for Jim Edgar (1991-1999)- had helped make him a favorite lessor of the state and recipient of a generous supply of taxpayer dollars.

With money to spare from his real estate earnings, the late Cacciatore would establish a college scholarship award and donate substantially to DePaul University- ensuring that at least the recipients of his charitable contributions would remember him well. That’s just the way the “city that works,” works.

All in the Family

The lot and building at 3518 W. Division is still in Cacciatore family hands today. In 1996 Victor and Charlotte Cacciatore established a revocable trust, ensuring that the estate would stay in the family. Worth noting, the family members listed on the trust have at least one thing in common in addition to being related. Living in Elmhurst, River Forest, Glenview, and downtown Chicago- they’re all many miles away from the vacant box store.

The building has now stood vacant for over two and a half years. The parking lot is perpetually empty, its surface cracked and overgrown with weeds. But the Zone of Silence is not entirely neglected.

Life Grew Where It Was Once Silence

The artist [rehs] has enjoyed observing natural growth around his UFOs and other sculptures. Typically this growth occurs in the form of vines and street weeds. Using his woodwork as a lattice, he sometimes deliberately cultivates pickles and goldflame honeysuckle.

Over time, the Blast! Fitness installation featured a different kind of growth: an expanding community of homeless people living in nylon tents. [rehs] describes it as a “beautiful evolution…from being a forgotten gym site to a growing community. Life grew where it was once silence.”

A Viaduct Over One’s Head

Homeless encampments have expanded through the Zone of Silence at Division and Central Park. In addition to the tents in front of Blast!, some homeless have settled across the street by the vacant CVS. Jay and Chris settled under the SOO line viaduct along the southeastern corner of the Blast! property.

“I pioneered this spot, if you will. I was the first one to stake claim here,” Jay tells me. “What caught my eye was the graffiti.”

“Why is no one at all under this thing?” he wondered. “I was like, something’s wrong, because there’s someone that sleeps under every viaduct.”

To be sure, Jay was being a bit facetious- not quite all viaducts in the area are settled. But perhaps viaducts, like abandoned fitness center awnings, at least have the appeal of serving as a roof over one’s head to block the rain, if not four walls to block the wind.

Despite the vulnerability of a public-facing location, Jay felt a relative sense of safety. “It was well-lit at nighttime.” But his friend Chris was shivering from the cold. A few miles east, someone had recently stolen his backpack full of clothes.

“It happens. You let your guard down a little too long and someone walks off with your shit.”

Not everything left outdoors gets stolen. To the amazement of [rehs], his Blast! UFO sculpture has remained unharmed. “It’s common for our works to be stolen, painted over or tampered with.” He speculates that “the growing tent community around it has deterred anyone from stealing the piece.” And so his art seems safe- for now.

Early this summer, an ordinance related to the Blast! Fitness site was presented to Chicago City Council’s Committee on Zoning, Landmarks and Building Standards. The ordinance proposes re-zoning the location from M2-1 Light Industry to C2-1 Motor Vehicle-Related District. The key players behind the scenes are Peter Cacciatore and O’Reilly Auto Parts. Needless to say, the wooden UFO and the nylon homes may soon be swept away.

“So be it,” [rehs] stoicly responds to the prospect of lost art. “If you put art out for the public and it stays for a week I’d consider yourself lucky.” He noticed that one of his previous installations was demolished at a site that’s now a huge condo building. His expectation is that the current installation will face a similar fate. “In 10 years it’ll be condos and I will no longer be able to afford my little coach house in the area.”

From Zones of Silence to Community Spaces

[rehs] can imagine a more generative use for the space in an area that’s already dense with garages and auto shops. “I’m no community planner but it’s a fantastic building for events, especially given the high ceilings and big doors.” It could be a “safe space for the community to gather” which he believes would be needed now more than ever.

Just think what the current generation of Cacciatores might offer the Humboldt Park neighborhood, if they wanted us to remember them well.